Kentucky’s seasonally adjusted preliminary July 2020 unemployment rate was 5.7 percent, according to the Kentucky Center for Statistics (KYSTATS), an agency within the Education and Workforce Development Cabinet (EWDC). 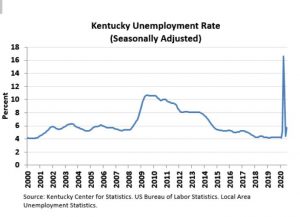 “Estimates of the number of people working in Kentucky have varied more than normal over the past few months. For July, the estimates indicate that fewer Kentucky residents were employed,” said University of Kentucky’s Center for Business and Economic Research (CBER) Director Mike Clark, Ph.D. “Workers who lost their jobs are considered unemployed only if they are looking for work. Otherwise, they are classified as not in the labor force. As workers lost jobs, both the number of unemployed workers and people who are not in the labor force increased. Kentucky’s official unemployment rate of 5.7 percent only counts unemployed workers who are looking for work. It does not reflect those who have left the labor force.”

In a separate federal survey of business establishments that excludes jobs in agriculture and people who are self-employed, Kentucky’s seasonally adjusted nonfarm employment increased by 26,400 jobs, or 1.5 percent, in July 2020 compared to June 2020. Kentucky’s employment was down 150,700 jobs or 7.8 percent compared to July 2019.

“While the number of employed workers was down in July, businesses reported an increase in nonfarm jobs,” said Clark. “This suggests that businesses continued to recover in July, but at a much slower pace than in June. Kentucky has now recovered 52 percent of total nonfarm employment losses that occurred from February to April.”

Kentucky’s leisure and hospitality sector recovered 13,300 positions from June 2020 to July 2020. This represents an increase of 7.9 percent from June. This sector was down 20,800 jobs since July 2019. The accommodations and food services subsector added 10,600 jobs from June to July. Employment in the arts, entertainment and recreation subsector increased by 2,700 jobs.

“Leisure and hospitality firms have recovered 72 percent of the jobs losses that occurred from February to April 2020,” said Clark.

Employment in Kentucky’s educational and health services sector jumped by 8,400 jobs in July 2020. The educational services subsector gained 1,000 jobs in July. Health care and social assistance subsector increased by 7,400 jobs from June to July. Since last July, the sector is down 11,100 jobs or 3.9 percent. 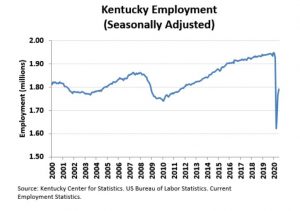 Employment in the information services sector fell by 100 jobs in July 2020. This sector was down 3,400 jobs from a year ago. The industries in this sector include traditional publishing as well as software publishing; motion pictures and broadcasting; and telecommunications.

The financial activities sector declined by 500 jobs in July 2020. The finance and insurance subsector lost 700 jobs while the real estate, rental and leasing subsector was up 200 jobs from June 2020 to July 2020. The sector was down 6,700 jobs compared to last July.

From Education and Workforce Development Cabinet