April unemployment rate in Kentucky balloons to 15.4 percent — a 10.2 percent increase from March

Kentucky’s seasonally adjusted preliminary April 2020 unemployment rate was 15.4 percent, according to the Kentucky Center for Statistics (KYSTATS), an agency within the Education and Workforce Development Cabinet (EWDC). 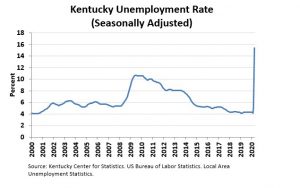 “The April employment estimates provide a clearer indication of the economic losses associated with slowing the spread of coronavirus,” said University of Kentucky’s Center for Business and Economic Research (CBER) Interim Director Mike Clark, Ph.D. “The number of people employed in Kentucky decreased by 11 percent, compared to a 14.4 percent reduction nationally. Still, these decreases in employment do not reflect the full cost to workers as many who were on temporarily layoff were classified as employed. The estimates also do not reflect workers who experienced reduced hours or wages.”

In a separate federal survey of business establishments that excludes jobs in agriculture and people who are self-employed, Kentucky’s seasonally adjusted nonfarm employment decreased by 289,600 jobs, or 15 percent, in April 2020 compared to March 2020. Kentucky’s employment was down 299,900 jobs relative to April 2019, or 15.5 percent.

“Restrictions to prevent spreading COVID-19, reduced demand for goods and services, and general uncertainty about the economy have contributed to Kentucky firms cutting their payrolls by 15 percent,” said Clark. “Declines in Kentucky’s payroll employment were higher than the 13.5 reduction for the nation. While Kentucky’s employment declined in all sectors, losses were concentrated in sectors that were subject to restrictions to prevent the spread of the coronavirus such as leisure and hospitality and retail trade.”

Kentucky’s leisure and hospitality sector shed 82,100 positions in April, a decline of 42.2 percent. This sector was down 89,600 positions since April 2019. The accommodations and food services subsector lost 69,700 jobs from March to April. Employment in the arts, entertainment and recreation subsector decreased by 12,400 jobs.

“Many of the jobs losses in manufacturing are likely due to firms temporarily shuting down plants to prevent the spread of the virus,” said Clark. “However, some of Kentucky’s manufacturers are experiencing reductions in demand for their products and uncertainty over when demand might recover.” 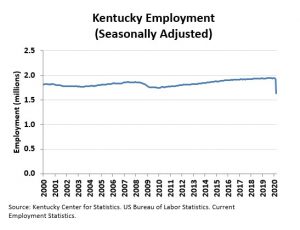 “While the health care sector typically performs relatively well during economic downturns, shortages of personal protective equipment and restrictions on elective procedures have contributed to fewer services being provided and a 12.5 percent decline in health care employment,” noted Clark. “National health care employment experienced similar decreases, with most of the losses being concentrated in offices of physicians, dentitsts, and other health care practitioners.”

Employment in the information services sector fell by 1,900 jobs in April 2020. This sector was down 3,300 positions from a year ago. The industries in this sector include traditional publishing as well as software publishing; motion pictures and broadcasting; and telecommunications.