Kentucky’s seasonally adjusted preliminary December 2020 unemployment rate was 6 percent, according to the Kentucky Center for Statistics (KYSTATS), an agency within the Education and Workforce Development Cabinet (EWDC).

The U.S. seasonally adjusted jobless rate for December 2020 was 6.7 percent, unchanged from November 2020, according to the U.S. Department of Labor. 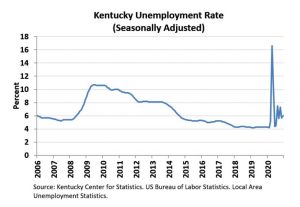 In a separate federal survey of business establishments that excludes jobs in agriculture and people who are self-employed, Kentucky’s seasonally adjusted nonfarm employment dropped by 9,100 jobs in December 2020 compared to November 2020. Kentucky’s employment was down 100,900 jobs or 5.2 percent compared to December 2019.

“Most of December’s employment decline was in accommodations and food service businesses, which operated under additional restrictions to help slow rising COVID-19 rates during the week December employment data was collected,” said University of Kentucky’s Center for Business and Economic Research (CBER) Director Mike Clark, Ph.D.

“While total employment was down, there were several bright spots in the jobs data. Employment in construction remains up compared to last year due to strong demand for housing; manufacturing employment has gained momentum over the past couple of months; and some of Kentucky’s sectors are finally showing employment growth over last year including retail trade, and arts, entertainment, and recreation,” he said.

Nonfarm data is provided by the Bureau of Labor Statistics’ Current Employment Statistics program. According to the survey, employment increased for five of Kentucky’s 11 major nonfarm North American Industry Classification System (NAICS) job sectors in December 2020 while five declined and one was unchanged.

The trade, transportation and utilities sector rose by 6,400 jobs in December 2020 or 1.6 percent. Employment in retail trade jumped by 4,200 jobs in December. Transportation, warehousing and utilities subsector posted an additional 2,100 positions. The wholesale trade subsector added 100 jobs from November to December. Since December 2019, employment in this sector was down 1,400 positions or 0.4 percent.

“Retail trade showed strong growth in December as consumers returned to stores for holiday shopping,” said Clark. “While retailers have not quite reached the employment levels just before the pandemic, December’s retail employment was higher than December 2019.”

Employment in the information services sector did not change from November to December. The industries in this sector include traditional publishing as well as software publishing; motion pictures and broadcasting; and telecommunications. This sector was down 3,400 jobs or 16.1 percent from a year ago.

The professional and business services sector dropped by 2,100 jobs or 1.1 percent in December 2020. The administrative and support and waste management subsector fell by 1,600 positions. The management of companies subsector declined by 100 jobs. Employment in the professional, scientific and technical services subsector was down 400 jobs. Employment in this sector was down 21,900 or 10.2 percent since December 2019.

Kentucky’s leisure and hospitality sector fell by 11,800 positions from November 2020 to December 2020 for a decrease of 6.2 percent. This sector contracted by 26,300 jobs or 12.8 percent compared to December 2019. The accommodations and food services subsector reduced payrolls by 12,700 positions during December while the arts, entertainment and recreation subsector added 900 positions.